Mooi and the Goose

Pet shops and shelters will tell you the same thing: most people looking for a pet cat have the same criteria.

On this list, Mooi was zero for four. She was a lame, long haired, four year old female cat suffering from human neglect and blessed with a litter of her own kittens. By the time I saw her at a kill-free shelter,  she had already been priced for quick turnover.

Pound for pound, there is no animal on Earth more dangerous than a cat, but here too Mooi was well below standard. With both back paws crippled by a birth defect, it took real effort for her to hop up on my lap. She may have weighed six pounds soaking wet -- fully grown she still looked like a kitten. You will never find a cat more gentle or more friendly. 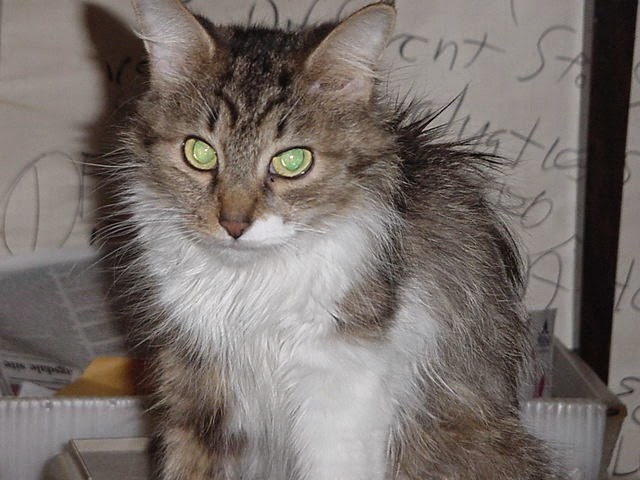 Mooi liked fresh air, so most days I let her outside for a few minutes of supervised play. One day she rounded a blind corner and spotted a large goose in the far lawn. This led to a brief play in three parts, one for each perspective.

I saw a bird far larger than my pet, but it took me a moment to think what that might mean. Mooi, equally friendly and fearless, bounced forward as fast as her crippled back paws would permit.  Fearing the worst, I started running after her. The goose, suddenly aware of being seen, leaped into the air and flew off, leaving us watching as it winged its way to a safer location.

I watched the goose fly off into the distance. Mooi sat back and did the same, probably wondering what all the fuss was about.

There is always an opportunity to learn from those around us, and from time to time and recall the lesson I learned from my gentle little pet. Don't be a goose. Never be afraid to make a friend.
Posted by Jay Elkes at 11:22 AM