On October 29, I changed my life. Will today be the day you changed yours?

At the start of 2011, I made my annual new year's resolution to do something about my weight. In March, I paid attention to it for a few days and my weight went from 185 pounds to 183. By late October, my weight was down to 178, a move in the right direction, but not much of one. That's when I pulled out Tony Robbins Ultimate Success Plan.

This plan has four steps:
1. Decide what you really want.
2. Take massive action.
3. Check to see if you're headed in the right direction.
4. If not, change your approach.

On October 29, I concluded that I was zero for four, so it was time to implement step four and change my approach.

In my journal, I decided what I wanted with a written goal and a plan. The goal was to weigh 155 pounds on or before January 15.

My plan identified the steps that I would take. The plan was simple, but the action, as Tony required, was massive:

No ice cream. No Steak N Shake shakes at 1000 calories each.
No trail mix. The bag says 60% less fat in big letters, and 150 calories per serving. I could live with that. I couldn't live with sevenmsrvings per bag.

Step two was to be aware of what I ate. I could choose a Wendy's spicy chicken sandwich at 450 calories or a Wendy's Grilled Chicken at 340. I found an IPhone app to track everything and report it out to Twitter and Facebook. Instead of an accountability partner, I looked for an accountability planet.

Step Three was to increase my exercise. The plan called for ten miles of walking every week. When I decided that didn't count as massive, I scaled it up. In December, I walked 132 miles, making me number ten out of over 3,000 people using the same program. 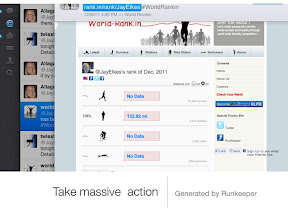 The programs I was using kept graphs of my progress. I recorded what I ate and what I weighed. I used a scale sensitive to 2/10 of a pound so I could see results every day. Some days were better than others. My January 15 weight check recorded 156 pounds, missing my goal by either a pound or a few days. As I write this today, on January 27, I weighed in this morning at 154.6 pounds. 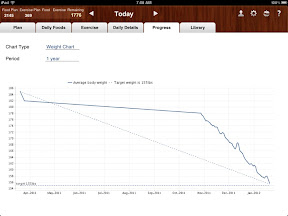 The ultimate success plan works because it includes tracking your progress, taking massive action, and being persistent if things don't work. Today can be the day you change your life, but you don't need to take my word for it, or even Tony Robbins.

As Buddah said, "in the confrontation between the rock and the stream, the stream always wins -- not through strength, but through persistence."

You can find out more about the Ultimate Success formula in Awaken the Giant Within by Anthony Robbins.

I tracked food and calories with MyNetDiary on an IPhone.it is also available as a web application at MyNetDiary.com. I used the IPhone app Runkeeper to track my walking. Both MyNetDiary and Runkeeper offer options to post progress to Twitter and Facebook.